Sorry for the long break, but I’ve currently been testing a lot on these operating systems and can finally say without a shred of doubt that there are now official versions of Ubuntu 18.04 and Ubuntu 20.04 that work on the LattePanda 1st Generation SBCs! In fact, there are many other versions of Linux Distribution operating systems that can run on the LP 1st Gen SBC, and if you can’t find them on this site, then it is still possible to be able to “make” an ISO disc image file of your favorite Linux Distribution OS by “respinning” it!

**The Documentations Page has been updated!! All new information to help you properly install the newest versions of Ubuntu 18.04 and 20.04 and fix any possible problems you may encounter can be viewed here.

Courtesy of a site called Linuxium, there are now more Linux operating systems available for the LattePanda and other devices which carry the small-but-powerful Atom or Apollo Intel processors. The ISO disc image files that you can burn onto a live USB using Rufus are called “respun” ISO’s, as they are modified to be able to boot up and install properly on these smaller processors. While you can go directly to the ISO page on the site and download and use pre-made ISO’s which have been confirmed to work on most Intel Atom and Apollo processor devices (including the LattePanda), you can also experiment a little and test your skills with Linux code in the How-To page. Here, you can test your skills on another computer which already has Linux to see if you can respin an ISO yourself using the tools that Linuxium offers you. This is advised if there’s a specific type of Linux operating system that you want to install on your device and want to make sure that you modify the version of the ISO file in order to ensure that it boots and installs successfully on your LattePanda.

The 1st generation of the LattePanda uses and Intel Cherrytrail Atom processor;

This information will help you to respin the ISO file correctly and be able to install and boot up the operation system successfully the first time around.

Also, please don’t freak out if you don’t see a regular screen upon booting up your distribution of Linux operating system via an HDMI display. This likely means that the LattePanda is configured to accept a different display as the primary display, which affects your ability to see what’s on the “actual” screen after boot-up. To fix this, you can alter the Grub file by adding “nomodeset” in front of the “quiet splash” words. To perform this action before boot-up, press e to edit the grub file directly at this point. Then, navigate the cursor to the words “quiet splash” and add the word “nomodeset” directly before it. The operating system should now boot up successfully! However, to make it permanent, you will need to now go into the grub file, change it again, and then perform a sudo update-grub. You can use whichever file editor you would like on /etc/default/grub. Then, edit the file in the same way as you edited the grub file before boot-up: locate the words “quiet splash” and add the word “nomodeset” before these words (but still within the qutation marks). Finally, save the changes, and then go back to the terminal and type “sudo update-grub.” Your computer should now start up correctly each time it boots up your distribution of Linux operating system!

While you could just download and install Python v3 or Python v2 software directly (although it likely is already on your Linux distro), you can opt to install JupyterLab instead, and experience the true strength of Python on a browser extension that can run multiple sections of Python code at once using its advanced kernel system! Just go into the terminal and type in “pip install jupyterlab.” If pip is not installed on your LattePanda’s Linux distro, the terminal will prompt you with a warning stating as much, and instructing you on what command you can type to install the pip command so that you can finally run this command properly in the terminal and install Jupyterlab. After that, starting up the software is as easy as going into the terminal and typing “jupyter lab” (yes, with a space in the middle).

Some versions of Linux (like the Ubuntu version 16.04 that you can get directly off of the LattePanda documentations) do not come with Arduino IDE installed. If this is the case, just go into the terminal and type in the command “sudo apt-get install arduino.” Installation will commence, and then you will need to configure one last thing before you can get it to start working. Since the internal code of the operating system may not grant the Arduino IDE software permission to use the onboard Arduino Leonardo co-processor connected via an internal USB, you will have to manually give permission to the Arduino IDE software to utilize this connection. You can do this either one of two ways: enter in the code “sudo arduino” to start up the program regularly and with access and permission to the USB port which carries the on-board Arduino Leonardo, or enter in the code “sudo usermod -a Gdialout $USER” to permanently grant your Arduino IDE software access to this USB port. (Note: Please proceed cautiously with this step, as this will give all groups in the $USER group dialout access, which is similar to sudo access.)

Once you have these tools at your disposal, there are no limits to what you can do in your new LattePanda Linux environment! 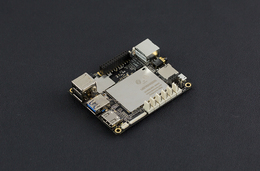